The atmosphere, continental surfaces, oceans and ice are in permanent interactions, through many physical, chemical or biological processes. This very complex set, called the "climate system", governs our climate: it influences the temperatures, winds and precipitation that we face over the course of days, seasons and centuries. The system evolves over time under the effect of its own internal dynamics and due to external forcings such as volcanic eruptions, variations in solar activity or anthropogenic forcings (in particular variations in the composition of the atmosphere - GHG - or land use change). 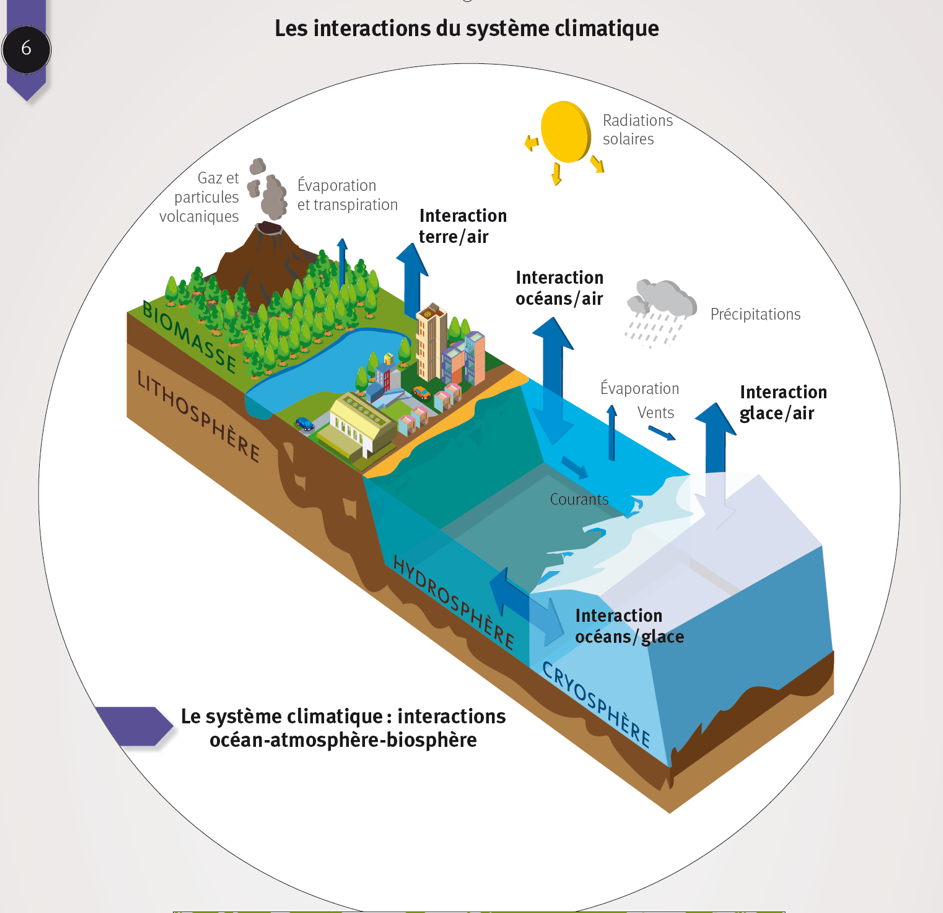 The contribution of the Sun to the evolution of the surface temperature is mainly marked by the 11-year solar cycle, which can explain fluctuations in global temperatures up to about 0.1 ° C between minima and the maxima. It is possible that a lasting tendency to intensify solar activity at the beginning of the 20th century, accompanied by internal variability, the increase in greenhouse gases and an interruption in volcanic activity, has accentuated the warming noted during this interval. However, it cannot explain the increase observed since the end of the 1970s. There was even a slight decrease in total solar energy between 1986 and 2008.

Volcanic eruptions vary the temperature on the surface of the globe by occasionally releasing aerosols that cool the Earth's surface into the atmosphere. Large eruptions, such as that of Mount Pinatubo in 1991, can cool the surface by about 0.1 to 0.3 ° C for up to three years, so a relatively short time.

Before 1870, when anthropogenic greenhouse gas and aerosol emissions were lower, the variation of solar and volcanic activity and internal variability played a greater role, even if the precise contribution of these different elements to the surface temperature is less certain. Periods of minimum solar activity lasting several decades have often been associated with cold conditions. However, they frequently involve volcanic eruptions, which makes it difficult to quantify the contribution of the Sun.

The great ocean currents which circulate permanently within the oceans and distribute on the planet the solar heat received by the bodies of water constitute what is called ocean circulation. This circulation is also called thermohaline, since it is activated by the differences in temperature and salinity of the waters (see video). Thermohaline circulation has still poorly estimated consequences on the climate today. 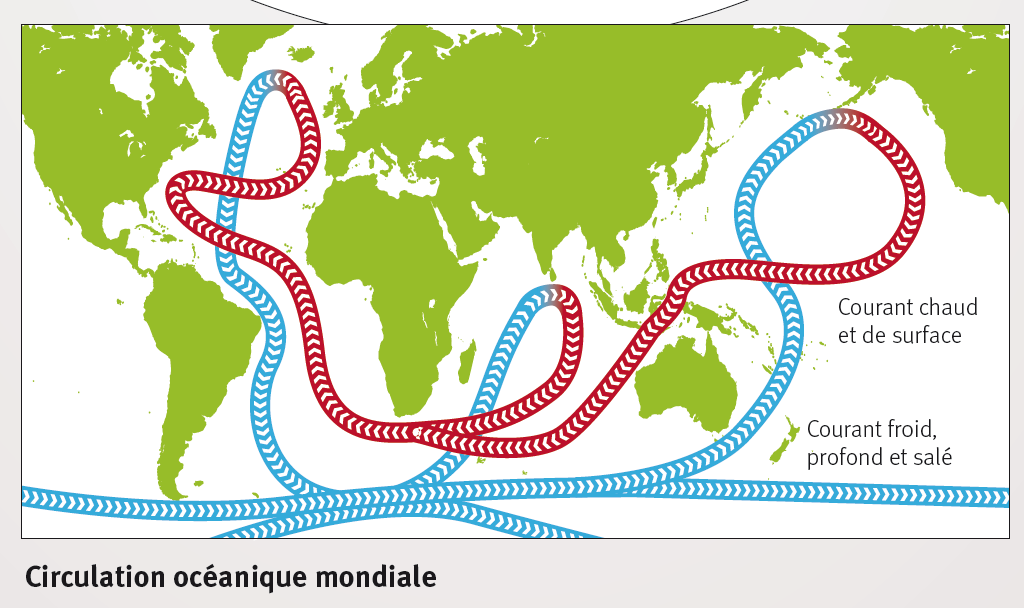 The cooled and salty waters plunge at high latitudes in the North Atlantic (Norway, Greenland, and the Labrador Sea) and descend to the south, to depths between 1 and 3 km, forming the deep North- Atlantic. The rise of these waters is mainly by vertical mixing throughout the ocean. It is estimated that a molecule of water makes this entire circuit in about 1,000/1,500 years.

The most important component of internal climate variability is the El Niño / Southern Oscillation (ENSO) phenomenon, which has a noticeable effect on interannual variations in average temperature in tropical regions and worldwide. Fairly high annual temperatures were recorded during the El Niño episodes, in 1997–1998, for example. The cold phase of the ENSO phenomenon is called La Niña.

The North Atlantic Oscillation (ONA, better known by the acronym NAO) designates a phenomenon affecting the climate system of the northern Atlantic Ocean. The ONA describes the variations of the ocean-atmosphere regime over the region and is generally measured as the difference in atmospheric pressure between the Azores high and the Icelandic depression. The variation of the ONA index is particularly important from November to April while the atmospheric circulation is very variable at mid latitudes, this is why the index is calculated in winter. The variations in the index can be large from year to year or more generally over periods of several years where the average index is rather positive (1980-1998), and others where it is rather negative ( 1955-1974). This long cycle of 20 to 25 years gives a more systematic effect on the climate, with in the end a contribution to our climate in Europe.

Finally, an influence of the moon on the climate exists, but in the very long term (hundreds of thousands of years at least). Astronomer Jacques Laskar has shown that the presence of the Moon has probably stabilized the axis of rotation of the Earth which, in the absence of the Moon, would have oscillated under the influence of the gravitational effects of the Sun and other planets. This presence therefore probably prevented major variations in the climate, alongside which the Quaternary glaciations were only details. One can imagine that these variations in climate, if they had taken place, would themselves have prevented, or at least greatly modified, biological evolution.

The claim that the time changes would coincide with the phase changes of the Moon is easily contradicted by the fact that the latter are synchronous throughout the Earth, while the former are not.