The IPCC (Intergovernmental Panel on Climate Change) is an organization which was set up in 1988. Through the evaluation reports it publishes, the IPCC reports on the climate situation and its developments.

In the fifth IPCC assessment report (AR5), four profiles of evolution of GHG concentrations (RCP, for Representative Concentration Pathways) were defined: RCP2.6; RCP4.5; RCP6.0; RCP8.5, from the most optimistic to the most pessimistic, named after the value of the radiative forcing induced on the horizon 2100 (RCP8.5 thus corresponds to a situation where the radiative forcing on the horizon 2100 amounts to 8, 5 W / m²). These profiles correspond to more or less major efforts to reduce GHG emissions at the global level. From these, climatic simulations and socio-economic scenarios were developed. 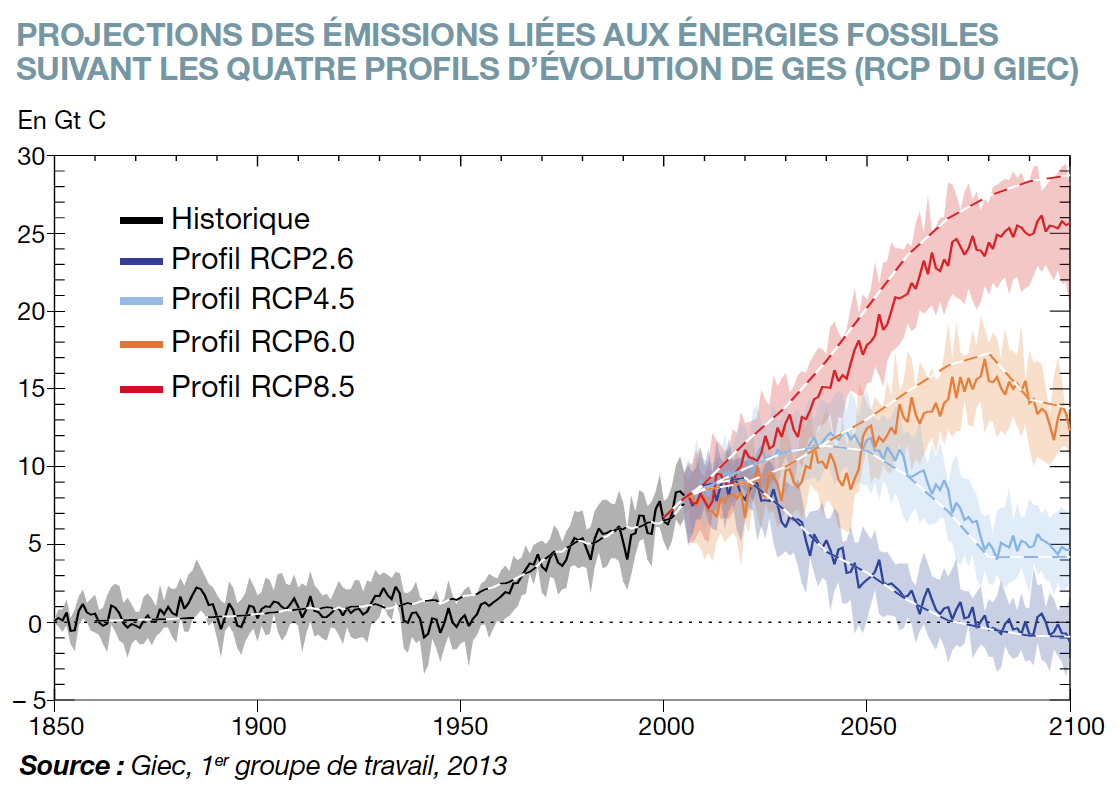 In preparation for the sixth edition of the IPCC report of 2021, France has presented two new climate models. They suggest that warming could be even greater in 2100 than expected (see video). Thus, the average temperature increase could reach between 6.5 and 7 ° C in 2100, almost a degree higher than predicted by the IPCC in its fifth report. The first model was developed by researchers from the Pierre-Simon Laplace Institute (IPSL), and the second within the National Meteorological Research Center (CNRM) of Météo France.

The inertia of climate systems: the impact of human activities on the climate will have consequences in the very long term. Even if tomorrow we stopped all greenhouse gas emissions, it would take centuries to stabilize the climate at its new equilibrium. The first factor of inertia is the lifetime of greenhouse gases in the air. After the emissions stop, it would take a few decades to a few thousand years for these gases to disappear into the atmosphere. Then, and after atmospheric concentrations stabilize, the air temperature on the Earth’s surface would continue to rise for a century or more. Ocean warming is slower than that of the atmosphere and is a key factor in this inertia.