According to the two contrasting scenarios of the IPCC, an increase in average temperatures on the surface of the globe for the period 2081–2100, compared to 1986–2005 is envisaged: 0.3 ° C to 1.7 ° C (RCP2 , 6) and 2.6 ° C to 4.8 ° C (RCP8.5). As you can see in the figure below, for both scenarios, the Arctic will warm faster than the entire globe and the average warming will be more significant on the surface of the continents than on the surface of the oceans ( very high level of confidence).

Regional or global projections of soil moisture and drought periods remain relatively uncertain compared to other aspects of the hydrological cycle. Nevertheless, a decrease in soil moisture in the Mediterranean basin, in the southwest of the United States of America and in southern Africa agrees with the projections of Hadley Circulation; thus, global warming makes an increase in drought likely in these regions for several degrees of warming according to the RCP8,5 scenario. In terms of flow, a decrease is likely in southern Europe and the Middle East, and an increase is likely in high latitudes in the North - an increase consistent with the expected increase precipitation. 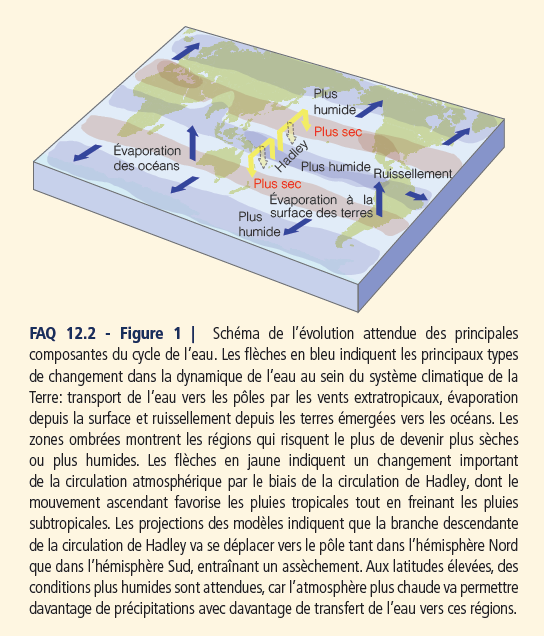 Expected changes in the components of the water cycle. The blue arrows indicate the main changes. : transport of water to the poles, evaporation from the surface then runoff from land to ocean. The shaded areas show the areas that are likely to become drier or wetter.

The arrows in yellow indicate a significant change in atmospheric circulation through the Hadley circulation, the upward movement of which favors tropical rains while curbing subtropical rains.