A heat wave is defined as an abnormally hot period lasting more than five consecutive days.

Volume 4 of the report "Le climat de la France au 21e siècle" entitled “Regionalized scenarios 2014 edition” presents the climate change scenarios in France until 2100. It was written by scientists from Météo-France, in collaboration with other teams in France (CEA, CNRS, UVSQ and UPMC grouped within the IPSL, and Cerfacs), BRGM, CEREMA and CNES, as part of a mission entrusted to Jean Jouzel by the Ministry of Sustainable Development.

This report presents climate change scenarios in France until 2100. For the first time, these projections are also carried out for the overseas territories. Temperatures, precipitation, wind, in average value and in extreme value: in all these fields, the published results, at the forefront of current scientific knowledge, are intended to constitute the reference data for several years. By presenting medium-term (2021-2050) and long-term (2071-2100) projections, the report makes it possible to perceive the progressiveness of the possible changes while showing the first noticeable impacts. 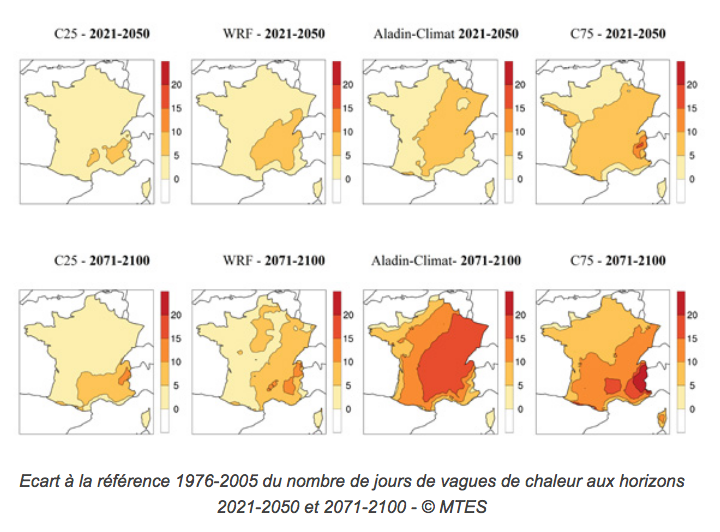 Watch a simulated television bulletin based on data predicted by climate models for 2050: Evelyne Dhéliat presents the alarming weather for 2050: see video.

Listen to the weather reports for the southwest of France Winter and summer in 2050 (voice of Joël Collado):