The effects of climate change on grass growth throughout the year have been described as follows by the CLIMFOUREL program:

To summarize these changes, we speak of an increase in the seasonality of production. 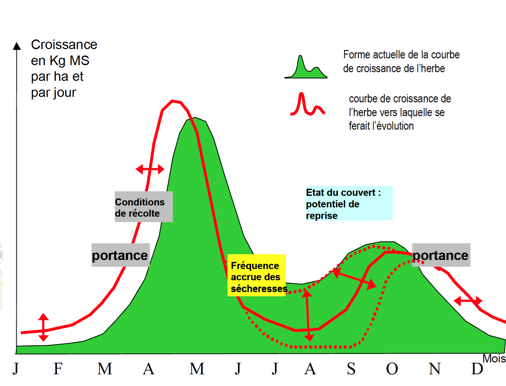 This CLIMFOUREL program, the objective of which was to support the adaptation of peri-Mediterranean farming systems to climate change and vagaries, also modeled forage production for a cultivated meadow. Overall over the year, the production drop was 11% between 1980 and 2008.

Figure: Trend in the production of an average peri-Mediterranean meadow from 1980 to 2008

This modeling confirms the different effects of climate change: grows a little stronger in spring, sharp drop in summer production, and in autumn, the effects of drought are offset by the effects of increased CO2 and temperature.