CLIMALAIT project - For the adaptation of dairy farming to climate changes

CNIEL’s governing bodies have asked for a support program for the dairy industry to adapt to climate change. In response, the Livestock Institute, in partnership with Arvalis, the BTPL, the Chambers of Agriculture, INRA and Météo France, proposed a program on this essential theme for the future of milk production.

CLIMALAIT's objective is to assess the impacts of climate change, in the medium and / or long term, on the various French dairy farming systems and to provide farmers and advisers with adaptation paths. The principle of the study is to work on a limited number of Dairy Units, representing the main milk production areas in France, to describe climate changes in the recent past and in the future (using climatic models), then assess the impacts of climate change on crops and suggest adaptations. 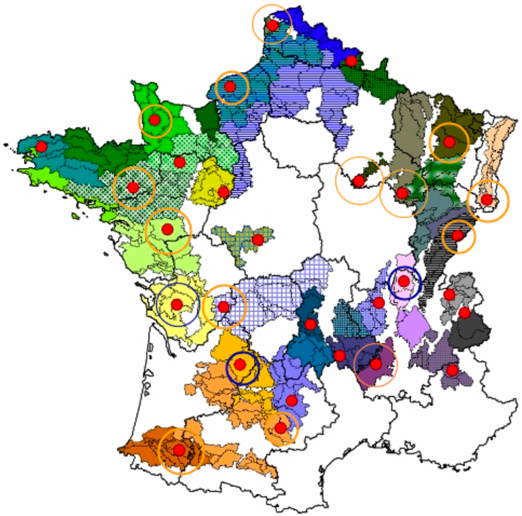 Figure: The 30 agro-climatic dairy units of the CLIMALAIT project

According to the dairy units, the CLIMALAIT program offers adaptation options targeting the fodder resource and the protection of cattle against heat waves. Adapting forage systems most of the time involves: