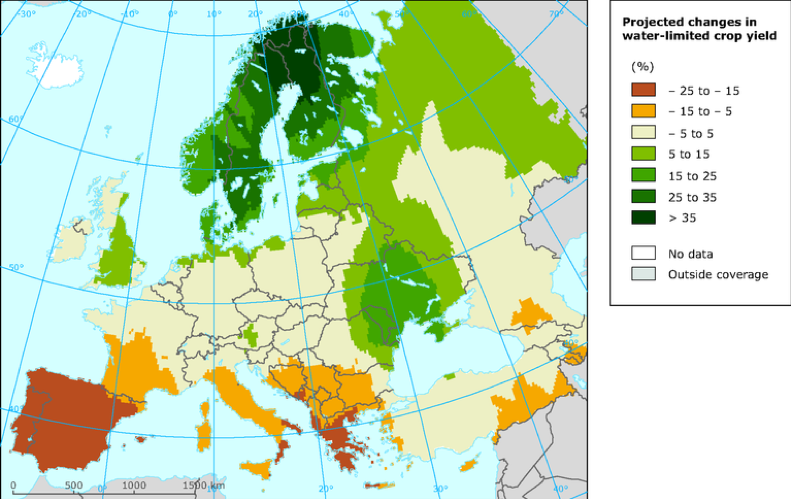 Climate change is likely to increase cereal yields in Northern Europe (medium confidence, disagreement) but decrease yields in Southern Europe (high confidence). In Northern Europe, climate change is very likely to extend the seasonal activity of pests and plant diseases (high confidence). Yields of some arable crop species, such as wheat, have been negatively affected by observed warming in some European countries since the 1980s (medium confidence, limited evidence). Compared to AR4, new evidence regarding future yields in Northern Europe is less consistent regarding the magnitude and sign of change (IPCC, 2014).During the 2003 and 2010 summer heat waves, grain-harvest losses reached 20 % in affected regions of Europe. Cereals production fell on average by 40 % in the Iberian Peninsula during the intense 2004/2005 drought (IPCC, 2014).

Earlier flowering and maturity have been observed (robust evidence, high agreement) worldwide in grapes and apples (IPCC, 2014). Changes in the phenological phases of several perennial crops in Europe, such as the advance in the start of the growing season of fruit trees (2.3 days / 10 years), cherry tree blossom (2.0 days / 10 years) and apple tree blossom (2.2 days / 10 years), in line with increases of up to 1.4 °C in mean annual air temperature have been observed in Germany during 1961–2000 (EAA, 2012). Wine production in Europe accounts for more than 60 % of the global total and makes an important contribution to cultural identity. In northeastern Spain, grape yield was reduced by an increased water deficit in the reproductive stages since the 1960s (IPCC, 2014).

Climate change can lead to significant shifts in the geographic and seasonal distribution ranges of vector-borne diseases in Europe. Climate can affect vector-borne diseases by shortening the life-cycles of vectors and the incubation periods of vector-borne pathogens, thereby potentially leading to larger vector populations and higher transmission risks. Over the longer term, seasonal changes could affect both vectors and host animals, as well as human behaviours and land-use patterns, thereby further influencing the geographical distribution, seasonal activity and overall prevalence of vector‑borne diseases in Europe (EEA, 2012). Climate change has contributed to vector-borne disease in ruminants in Europe (high confidence) and northward expansion of tick disease vectors (medium confidence). The spread of bluetongue virus in sheep across Europe has been partly attributed to climate change through increased seasonal activity of the Culicoides vector. The distribution of this vector is unlikely to expand but its abundance could increase in Southern Europe. Ticks, the primary arthropod vectors of zoonotic diseases in Europe (e.g., Lyme disease and tick-borne encephalitis), have changed distributions towards higher altitudes and latitudes with climate change. Exposure to fly strike could increase in a warmer climate but adaptation in husbandry practices would limit impacts on livestock. The overall risk of incursion of Crimean-Congo hemorrhagic fever virus in livestock through infected ticks, introduced by migratory bird species, would not be increased by climate change. The probability of introduction and large-scale spread of Rift Valley fever in Europe is also very low (IPCC, 2014)